A short river with a long history

A short river with a long history

Whether you are a resident of Galway City or a recent arrival, you are sure to be drawn to the beautiful River Corrib which surges through the City and sweeps into the sea right in the heart of this ancient place.

In this blog you’ll hopefully some great ideas on different places to explore when you’re not focusing on how to improve your writing skills or how to pass the IELTS test! Afterall, one of the main reasons for international students to study English in Galway is that the city is just so beautiful – a city with views of the Atlantic ocean and a beautiful river running through the heart of the city? We’ve got it all here!

So now we’re going to delve a little more into some hidden history of the beautiful waterway that is the River Corrib and give you some key facts from our resident history expert – this Galway information will have you sounding like a local in no time!

A Natural Wonder: The River Corrib

The River Corrib in Galway seems to have an energizing effect on many who encounter it, and although only six kilometers in length from its source in Lough Corrib, it is the believed to be the fastest city river in Europe. This is because it is the only outlet for all the water drainage from three loughs (lakes) stretching well over a 70 km north of Galway City, most of North East Galway and South East Mayo. According to the National University of Ireland in Galway, the River Corrib is capable of continuously supplying enough power for 5000 homes at even sixty percent of its capacity. The last kilometer or Lower River Corrib is spanned by three bridges all easily accessible on foot, as with much of Galway city, allowing you to saunter around the city during your free time from studying English in Galway.

Whether accompanied by a Galway Cultural Institute guide, with other international students or simply enjoying some time alone, exploring on foot is a great way to experience this section of the river channel which is still relatively unchanged after millennia of human settlement. The banks of the River Corrib offer up to 4km of unbroken walking starting at Nimmo’s Pier in South Park where it enters the sea, a familiar sight for students taking English courses in GCI who can gaze across Galway Bay to the mystical Burren Hills.

Further along the river to the north we pass over the three inner city bridges and past The Salmon Weir Bridge dating from 1818, where fishermen can often be seen wading into the river in search of wild salmon. As you move out of the centre of the city through the University campus and under the river’s fourth and final bridge, the Upper River Corrib reveals its grandeur. It develops into a wide powerful body of water with native wetlands still within its city boundaries and remnants of ancient woodlands.  The lack of built development has enabled a variety of sea birds and wetland species to coexist with their human neighbors all along the River Corrib in Galway. One of the most magical experiences for any student has to be encountering nature within Galway City and a fabulous way to refresh and energize yourself when taking a break from your exam preparation course here in GCI or perhaps while enjoying your summer English course in Galway.

Echoes in Time: An Unwritten Past

Strolling through the peaceful university campus sportsgrounds at Dangan it is possible to view an ancient landscape across the river in the townland of Menlo. Archaeological discoveries in this area from both diving and field walking have revealed both Neolithic (up to 5000 years ago) and late Mesolithic (up to 6000 years ago) artefacts which have been mostly stone tools and axes. A Neolithic burial chamber dating from 5000 years ago still exists there, suggesting a continual period of habitation by a well-established community of hunter gatherers and early farmers. It is obvious that the rich flora and fauna of the area encouraged the earliest inhabitants of Galway to use the river as a natural route into the interior from the coast in search of fish, wild animals and later farmland.

There have also been a variety of metal weapons found in the river at this point, further upstream and at the bottom of various points of the lough Corrib. These include Bronze-Age spears and weapons (up to 4500 years old), Iron Age axes (over 2000 years old), Viking axes (over 1100 years old) and other weapons and objects associated with both transport and warfare including ancient boats up to 4500 years old. Imagine the river you are now looking at was a busy place for millennia, possibly the only means of travelling inland from Galway.

Would you like to follow their ancient path? Well, if so, Galway Cultural Institute regularly organizes river trips from the heart of the City to the southern part of Lough Corrib. As mentioned previously, the River Corrib offers a great escape for short stay students and longer term students to spend some time together in a different environment and find a new ways to practise your English.

Chronicles: The Written History of Galway

It is now believed by historians that Galway was in fact the original name of the river, the latter was then renamed after its source lough Corrib, originally called Lough Orbsen. The earliest written account of the river’s name is believed to be from Ptolomeny’s map of Hibernia and written in Latin as Ausoba in the 2nd century AD.

The town of Galway was originally an ancient Gaelic fortification almost entirely surrounded by water thus providing a natural defense and crossing point at low tide. Vikings had been known to raid inland on high tide and use the river to navigate inland during the 9th and 10th centuries AD. However, by the 11th up until the early 13th centuries, The Gaelic Kings of Connacht, the O Connors controlled a fortification here with the assistance of the O Flaherty and O Halloran clans.

Would you believe that little old Galway has been besieged at least thirteen times throughout history?! Perhaps, the most significant was by the Anglo Norman De Burgos in 1232. They secured the river crossing from the O Connors and facilitated the building of what we now know as the medieval city of Galway.  Ironically, the De Burgos were thrown out of the city for becoming too much like the Irish and by the fourteenth century their city status and power was usurped by the fourteen tribes, a cartel of mainly Anglo-Norman traders loyal to the English crown law and customs.

Many native Irish families continued to resist the Anglo Normans and remained in power throughout much of West and East County Galway until the late seventeenth century maintaining their traditions and independence. These Gaelic families are still well-established family names throughout Galway City and County.

Directly across the river from the old medieval heart of Galway city sits the ancient village of the Claddagh, still home to perhaps some of the oldest family names associated with Galway, and indeed their own king! Their houses used to be thatched but were demolished and rebuilt in the 1930’s to improve health and quality of life. Claddagh was a fishing village for centuries with over two hundred boats, some of which, including the famous Galway Hooker boats, can still be seen docked beside the village.

A City of Streams and Islands

Walking along the River Corrib you will no doubt encounter the imposing Galway Cathedral – a catholic cathedral built in the 1960’s on what was formerly the site of the old Galway jail. This area of Galway is now known as Nun’s Island, however, it is in fact two islands intersected by the Convent and Gaol Rivers and bordered by Corrib River and Galway Navigation Canal. Both of these islands are just over 0.5 km long and a little under 0.2 km wide.

The earliest maps of Galway suggest there were in fact a string of Islands on the west bank of the old town of Galway. These were probably joined by bridges and roads in the 18th and 19th century as Galway began to industrialize and develop hydro power. This hydro power served up to 29 factory mills producing wool, whisky and timber.

A historical survey by NUIG Galway suggests the earliest names we have for these Islands are The Island of the flocking birds, The Island of the goats, Ballymany and Earl’s Island. Galway is known to have been called The Town of the Streams in folklore owing to the number of streams and rivers flowing out of and back into the River Corrib thus creating the Islands.

This part of the city is away from the hustle and bustle of the main center and offers the visitor a relaxing diversion from study and work, perhaps even providing a little inspiration. 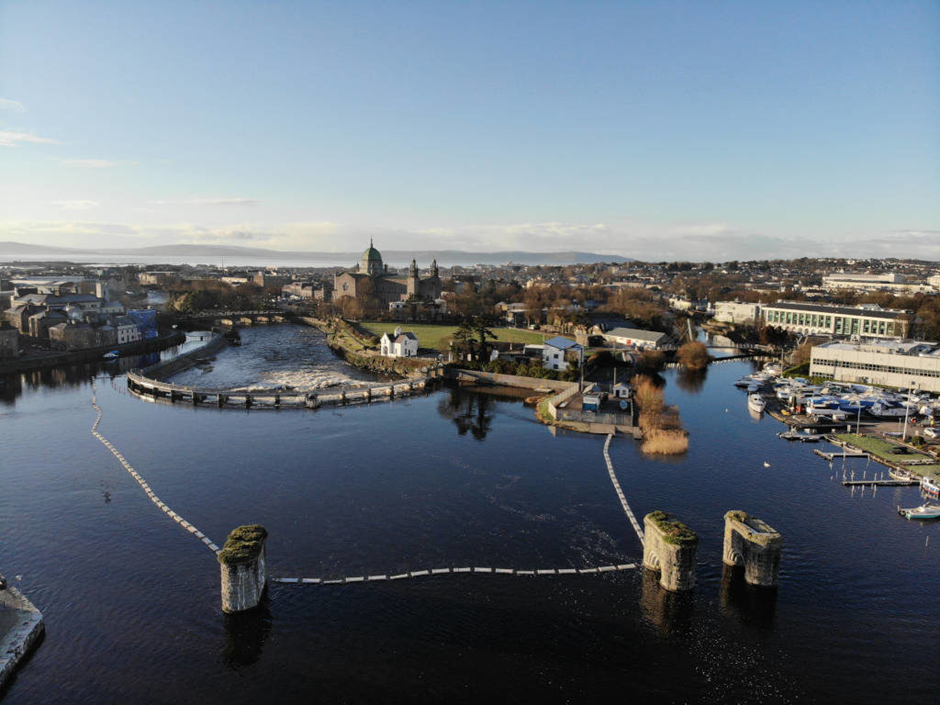